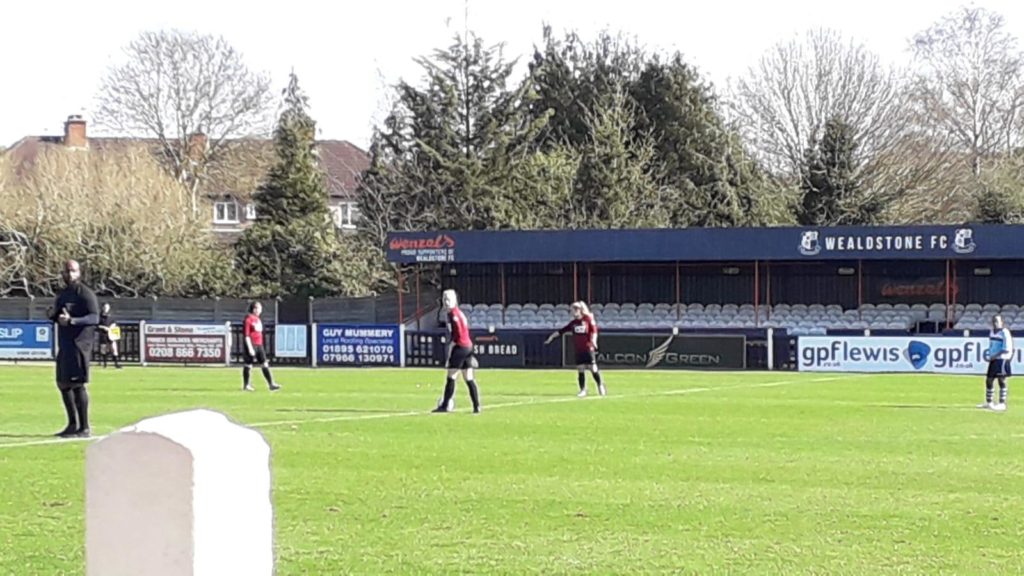 A three-week break for Stokey and a win over top of the league before that, saw a complacent side turn up to Wealdstone FC today. The incredible pitch, fans in the stands and beautiful day didn’t even wake us from our slumber. We just seemed to be lacking the usual intensity and energy we have come to know and love over the season. The ball pinged around on the sublime surface (genuinely better than your carpet at home) but we failed to break down the back four and put it in the net. It wasn’t that we were playing badly – Iris was smashing it in right back – keeping their key player out the game, Naomi was buzzing around the top, Ciara was bossing the midfield…but we just knew we could play so much better as a team!

A tactical change from Monahan was needed, as she brought on super subs Sted and Zhane to add some creativity to our play.  Within the first minute they brought the fire. Zhane charged through the defence, took it past the final defender and slotted it past the keeper. The deadlock was broken. 1-0 Stokey.

We started to come alive. Play continued with great energy from Naomi up top, pressing the defenders back in their own half and forcing mistakes. The midfield were solid with Saskia, Zhane, Lucy all doing stints in there to control the play and find the feet of the Lenny, Sted and Link. But the Ref wasn’t on our side. Thirty minutes into the game he gave Wealdstone a very questionable penalty and they popped it top corner to make it 1-1.

Time for a re-group.

The second half started with a bang. Harriet was a continual threat on the wing and Phoebe Matthews had the vision to see her run every time, allowing her to run at the back four and find Lenny’s feet to really put the pressure on. Under Phoebe’s leadership the back four stepped up their line and Bae kept their technical right winger under control with Annie sweeping up and carrying the ball back up the pitch.

We had all the possession and we knew it wouldn’t be long before we found the net. Ciara sailed in another impeccable corner which got a fantastic flick on from Lucy to find the feet on Sted who buried it in the goal (her first touch after coming back onto the pitch as a sub – super sub is no lie here). 2-1. Ciara continued to dominate the midfield, like Paul Scholes, and spread the play far and wide. It found Harriet’s feet who took it down the wing, made the pass to Link who took some players on, before squaring it to Naomi who finished it with one touch (good to have her back). 3-1.

In all credit to Wealdstone they kept fighting and Polly’s communication from the back kept us engaged with the game and stopped us putting ourselves under unnecessary pressure in our own half. At the other end, shot after shot failed to create the ripple of the net but we didn’t stop. Great support from our die-hard Stokey fans kept our fight up and we were rewarded as Zhane collected the ball on the edge of the box, took a few touches and launched it at the keeper. 4-1 Stokey.

All in all, it was a much-needed win. But a bit of a weird one. We look forward to analysing our Match of the Day play back and hearing insights from Alex Scott before we go into our final game of the season. Bring it on!