You may or may not know this, but I play football. At the age of eight I fell in love with kicking a ball around a field and trying to move it towards the goal to score. Fast-forward twenty years and not much has changed; I still spend my Sundays in exactly the same way – although *spoiler* I have grown up (in some ways at least). Over the years there have been good games and there have been tough games, there have been fantastic results and there have been demoralising results. But there has always been a team, and a captain, and sometimes that captain has even been me. 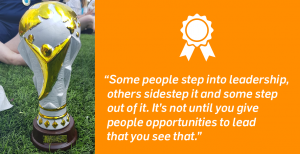 The captain is defined as ‘the leader of the team’; someone who drives others forwards, who motivates, inspires and picks up the pieces when things are not going to plan and everyone’s heads are down.

Being the captain is seen as an honour, but it can be a thankless task, with a lot of responsibility and a lot of intrinsic motivation required – they have to pick themselves up first before they can pick others up. It is often forgotten how hard they work, not only to perform at their best, but also encourage others to perform at theirs.

Recently, my team competed in a Sunday tournament and, as we had multiple games, I saw this is as the perfect opportunity to provide others with the opportunity to lead – to captain the glorious AFC Stoke Newington to victory on a hot afternoon in Hackney. At first, my suggestion of “sharing the captaincy” went down like a lead balloon; some people looked at their feet while others suggested the “natural leaders” already in positions of responsibility. But I held out the armband to one of the quieter members of the team who reluctantly pulled it over her sleeve. Every game it was passed to someone new. Some people thrived as captain, others shied away from it, but all in all it taught us a lot about shared responsibility and stepping up when we need to.

As I walked to the train last Friday, I was talking to my CEO about the tournament and he said, “It’s so similar to work”. I looked at him, slightly puzzled. But he then drew parallels with how some people step into leadership, others sidestep it and some step out of it – and it’s not until you give people opportunities to lead that you see that. He wants people at our organisation to own it as well as him and not look to him as the permanent ‘captain’, having to approve everything. He wants us to make our own informed decisions, thereby creating a team of leaders. It’s a good idea.

We made it to the final of the tournament and it was at this point, when the stakes had been raised, that I questioned whether it was still appropriate for others to lead the team. Were they really up to the challenge of determining our strategy at this level? Could they handle motivating us when we were under pressure? These doubts were quickly dismissed when one of the shy members of the team spoke up about our plan of attack in this final game. So I threw her the armband and she captained us to victory, winning the game and the tournament. 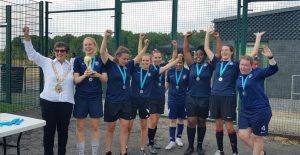 Captaincy in the workplace

Sharing the captaincy is something I think we should try to do more of within the workplace, as I believe it can bring the following benefits to us and our teams: