Imagine this. Someone close to you is desperately trying to say something important. Yet, for some reason, you have been forced to permanently wear ear plugs and are unable to hear what’s being said, and can therefore not pick up and respond to them speaking. Or imagine a WebEx where audio is broken. It’s a brave individual that would attempt to continue with pictures only.

For many of us, losing our auditory sensory communications channel would be a significant obstacle to overcome in meetings, deals or workshops.

Yet few of us truly tune in to the non-verbal communication channel that is permanently and publicly open, switched on, and active.

As an evangelist of paying attention, I have to practice what I preach. When facilitating workshops, it is this non-verbal language that provides much of the information on which I operate.

At a recent leadership training, we did an exercise in small groups. After five minutes, one whole team suddenly sat back in their chairs, and as one, spontaneously folded their arms, and stopped talking. Without hearing any of their discussion it was obvious to me what had happened.

Decoding this body language always gives me a rush. It feels almost like cheating. In this case it allowed for a little presentation skills “magic” as I was able, in a humorous way, to tell the whole room exactly what they had decided and why without asking the individuals a thing. And I then unveiled their inner thoughts and motivations about being the best in the room, smarter than me, etc.

This time they squirmed in their seats a little, gave some half smiles, and finally sat bolt upright. I think we can all read that, right?

But what information did I use to get the initial read? 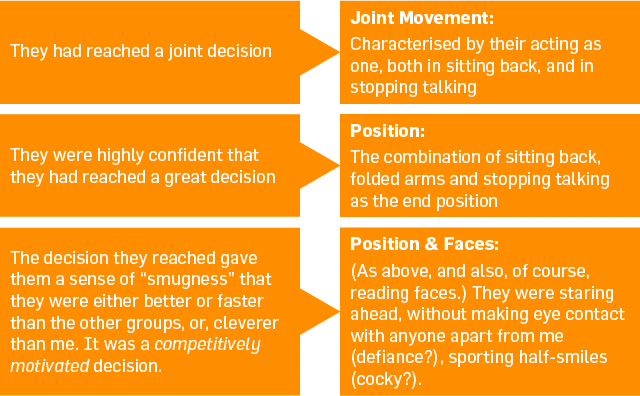 Finally, if you enjoy learning and love a story, Joe Navarro’s gripping account of his time in the FBI, in his bestseller Three Minutes to Doomsday is a winner. Nearly every page shows further detailed strategy for decoding body language.

Apparently, a journey of a thousand miles begins with a single step (at least, the behaviour of taking a single step does imply some intention to take more than one step). By opening our eyes and minds we can discover a great deal. Even simply on the journey home.