One of the biggest myths peddled by L&D practitioners is that business people’s greatest source of learning is their mistakes. At Interactive Workshops we take a great deal of interest in what our clients share with us. Yet we maintain a healthy scepticism on the validity of what we are told. Our industry exists on a nutritionless diet of truisms and myths, often peddled by wizards or magicians who claim to have ‘the solution’. Here are some of the so-called solutions:

In the kitchen at IW towers yesterday we got deep into a conversation about the myth of learning from mistakes. There is a big myth that learning culture dictates an embracing of mistakes. Entrepreneurs, we are told, make mistakes all the time. Well, absolutely. And between 70-90% of start-ups fail. And therefore, lose all their money.  Henry Ford failed many times we are told. This is survivor bias. It’s like Justin Bieber saying “work hard and you will fulfil your dreams”. No, Justin. There is only one Justin Bieber, and only 52 number one singles in a year. Six billion people, therefore, can’t become an iconic global popstar  – no matter how hard they work.

There are two main phases where we can structure learning.

Actively embracing learning after the event dilutes the power of learning before the event.

Parachuting… now there’s an example of where prior learning outperforms learning from mistakes. Or car design. Driving? Or hiring. Or leading. Or graphic design. Or sales. Or poker…  Hang on; there’s some kind of trend here. 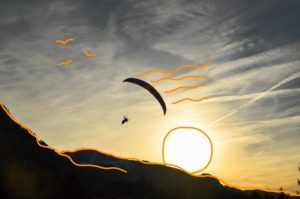 Prior learning is the way to go. Society has a huge infrastructure built around prior learning. Schools, universities, colleges… these are all prior learning. As I understand it, there are very few institutions built specifically to capitalise on learning from mistakes. Very few people taking MBAs after they have retired.

Part of our conversation in the kitchen was because lately I’ve found myself trapped in a vicious cycle of criticism. I get frustrated when people don’t do it right. If figures don’t add up. When work has typos. When a sales process breaks down.  The epiphany (and huge irony for a learning agency) was that prior training is the most effective way to avoid the waste of time that is mistakes management. My realisation and costly mistake: I’ve got to invest in more training.

Learning from mistakes is fine. But the very best people are smarter. They learn ahead of time, through education, training, gathering support from experienced people, asking questions, planning, risk and contingency planning and mitigation, scenario planning. A very good friend of mine works in an extremely high-level sales role. He says the main part of his job is “thinking”. He spends time thinking very deeply about how to win each and every deal, before executing a brilliant strategy. He claims, as the top performer in his company, this is his competitive edge.

These kinds of people build an unshakeable confidence because they make very few mistakes. As a consequence, they experience repeated success, even in new and stretching areas. They harness an aura in their social sphere as can-do people; amongst their client base as winners. They get put into bigger roles, more important work, elevated.  Our office is full of such people. As is our client base.

Learning from mistakes is fine. But the very best people are smarter. They learn ahead of time.

As a graduate trainee at BMW Group in my early career I was told “we don’t make mistakes, we are BMW”. At the time I was a bit taken aback by this perfectionism. But reframing it now I can see that company was packed with brilliant people who made sure they had all it took to succeed ahead of time. Then executed flawlessly (nearly all of the time). Excellent people were attracted to work in that organisation. This flawless execution is exceptionally efficient. This flawless execution created a culture where people paid a great deal of attention to their work and made sure it was done very well. Occasional mistakes did happen. Famously, the marketing director had a jar on a shelf where we had to pay £10 for every typo in a document. People who didn’t perform consistently were exited.

To be 100% clear: When mistakes do happen, we must learn from them. We can crack open the bone and feast on every bit of the delicious marrow of failure.  But championing learning from mistakes is to invite a culture that fails to invest in prior learning as a preference, accepts shoddy workmanship with a ‘let’s do it better next time’ attitude and creates confusion about what the standard is. ‘Standard’ is such a beautiful word.  Personally, I’d prefer to know the standard, to learn up front, get it right, and head home early, happy that I’ve done something really well.