Using the power of not being done.

This article has been on my mind for a while. There’s a nagging thought… ‘I haven’t yet written that post about the frustration of not being done.’ There it is. That frustration again. I feel it about any piece of work that hasn’t reached my workflow yet. It’s the same feeling when something has been sat on the log of the Kanban for so long it’s in danger of being moved to the Kan’t-ban.

Rapid growth demands rapid development for employees, a frustrating growing pain in start-ups and scale-ups in particular. In short, it means getting a heap of work done. Fast. Under this stretch, it can feel frustrating that there’s something that’s not done. When constantly reprioritising, work will of course get ‘bumped’, ‘shelved’, or whatever friendly word we want to call uncompleted work to make us feel better.

When it comes to dealing with this nagging, annoyed feeling, there are a few common options for dealing with it. 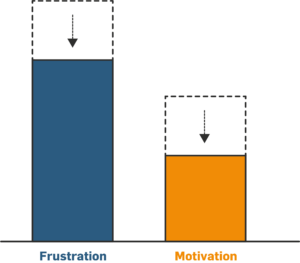 Soothe the frustration feeling by doing something (anything!) else. Or if we’re not avoiding the task, we’re just ignoring the frustration. (“Maybe it’s not so bad that it hasn’t been done?”) This reduces the frustration by also reducing your motivation to do something towards completion.

Put off completion of the task until it absolutely has to get done. Maybe until a colleague or manager is asking for it. We intentionally (or sometimes subconsciously) drop our motivation level to delay being really frustrated until later. Later, frustration levels inevitably increase (the task is still to be done and this time someone’s chasing you for it). Strangely, this seems to be the most common response to the frustration of an uncompleted task and has the least desirable outcome. 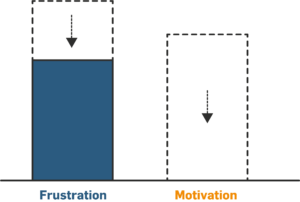 In certain situations, drop motivation levels to zero and decide the task won’t be done. Frustration also drops, but at least a small amount of frustration lingers. After all, we’re now frustrated that we got so frustrated about something that was destined to be abandoned.

But a much less popular option is something I’ve learnt to do at Interactive Workshops. Utilise your frustration as motivation. 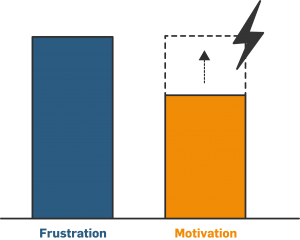 Convert frustration into motivation. By utilising the frustration, motivation levels reach frustration levels and beyond. We can allow that frustrated feeling so that it supercharges our motivation. Really annoyed it’s not done? Great. Let’s use that. How good would it feel to get it off the to-do list or kanban? Or to never see it pop up in the calendar ever again? More motivation for us. A ‘just try harder’ mindset might slowly power you to action. Frustration fast-charges motivation.

It’s a ‘simple but not easy’ conversion. It asks us to hold on to our frustration when we’re very used to trying to reduce it or ignore it. We can even allow ourselves to be as frustrated as possible about those projects or sales we abandoned and channel that into motivation to deliver the next project or sale.

Frustration is an underrated and powerful motivator.

How do we use the frustration:motivation conversion in practice?
Here are a few questions to consider: