Variety – you just can’t beat it.

Here is a list of some of things you might usually expect to encounter during the first month of your first ‘proper’ job:

Make no mistake, I have done a few of these things. Afterall, it comes with the territory of being the new face in the office or even just a regular employee. Where things differ at IW, however, is all the other stuff:

Less than 24 hours into the new job and I’m already being asked for my daily ‘deliverables’. In other words, ‘What are you going to get done today?’ Not, ‘Here’s what I’m telling you to do, get it to me by the end of the day’ but rather, ‘What do you want to do, and how long do you think it will take you?’ There’s a logic there that seems so obvious yet lacking from the way lots of people work. 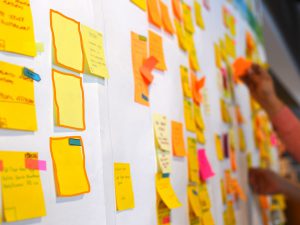 Ten days in and I’m already on a case study ‘hack’ (believe me, one of the hardest things to get your head round is the jargon at IW) as part of a decision-making workshop that IW are running with a new client. The word ‘hack’ seems to perfectly sum up what happened – two days of intense, uninterrupted, creative thinking to produce something very specifically tailored for our client.

Three weeks in and I’m part of a team designing and presenting some new programme concepts to take to a client. It’s not exactly starting slow is it?

Oh, and did I mention that I’ve even been to an IW wedding – an experience I’m unlikely to forget as a human being let alone a two-week-old newbie. Think Dirty Dancing but with more donuts. But more of that another time…

It’s not just the things I’ve been doing, it’s the people who I’m doing them with. Being asked about my weekend and having people really listen to the answer. Sitting down at IW High Tea, Gail’s cherry scone in hand, chatting about who knows what after our afternoon ‘sprint’.

It’s the small things which make it so welcoming. Being asked to do something that matters. Getting thanked for it but no more than anyone else. Not being taken advantage of just because you’re the new grad and only started paying for your own phone contract earlier this year…