I’ve been on a journey over the past two years. I started at Interactive Workshops in April 2018, not really sure what I was getting myself into, but knew I wanted to get myself onto a new path and this seemed an opportunity I couldn’t miss. For a start, I was promised there would be lots of travel, autonomy, and personal development – a promise I’m used to taking with a large dumping of salt – but for some reason I trusted the look of this group of self-starting entrepreneurs, so I took the job.

The first six months were full of travel to Zurich to work on the biggest project we’d ever won. It was slightly outside of our comfort zone, but as a team it was clear that we all loved a challenge, so we grabbed the bull by its horns and got it done to the highest quality. During this process, I was certainly travelling a lot, and I was certainly learning, but the autonomy and personal development I wanted weren’t quite there yet. “Should I have taken these aspects with a little more salt?”, I thought. “Still early days, let’s give it a little longer.”

By the end of my probation things were starting to tick along. I began to build a good relationship with my immediate boss, and the autonomy came. Next thing you know I’m leading a few clients of my own, something which sort-of took me by surprise, but nevertheless I accepted. But I didn’t quite feel that I had developed personally. 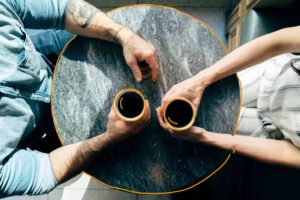 Now, a few things to know about me – I’m a perfectionist and my own worst critic, but I’m also self-aware, confident and sometimes lazy. Probably the worst combination of person when it comes to personal development. When I look for development points, I already feel that I’m able to self-analyse quite easily and identify what to do better next time. This was a problem for me in the beginning of my career as I didn’t think I needed to ask for more. Although as I grew, I discovered that I should always make a point of asking others for feedback. But did I ever really listen? My overconfident-self would always end up trying to defend, or argue why I’d done something a certain way. I was right, after all…

What really hit me, pretty much as soon as 2019 began and after a few tête-à-têtes with my CEO, is that I really had to change the way I looked at feedback, especially when I’m taking it in front of others. If I really wanted the development I seeked, this was probably the main thing that was holding me back. The realisation was just the first step, I had to start working on how I was going to actually do it. It was a tough process – I spent a lot of time in self-reflection, talking to others, taking CBT (cognitive behavioural therapy) – and plenty more issues came up outside of just taking feedback. But the process had started and that was progress. In fact, it’s still on-going. Of course it is, it’s development. It’s not an exam.