Have you ever led or been part of a short-term project team, perhaps even to manage a crisis, where the performance deliverables were crystal clear, everybody knew their role and the team had high levels of competence for the situation? It’s likely that this project was a great success, and the team that delivered it had high levels of trust, respect and effective communication. So how can you bring these success principles into play when operating in a business-as-usual environment? Let’s examine the disciplines that a successful project team have in place and why they are so important to integrate into any team.

What is the purpose of your team? This is a simple question to ask, yet many managers find it difficult to answer with clarity. So, before you read on, answer the question: why does your team exist? Once you can clearly establish an aspirational purpose, you can define the team goals and game plan. Take time to identify – and agree with your team – simple measures that truly represent the team’s success, and link this to individual performance so everybody is focused on achieving what matters most.

High-performing teams are equally committed to a common purpose, approach and goals for which they hold themselves mutually accountable. That common approach includes sharing a set of values that governs how you will behave wherever your purpose and goals take you. Involve team members in personalising the values for your team; by asking ‘how will we show integrity, transparency and respect in the work that we specifically do?’ This discussion should generate some clear rules of behaviour e.g. ‘we arrive at meetings before the start time’. ‘Conflict/ disagreement should be dealt with face-to-face not via e-mail’. Team members will more likely live the values if they can see their direct relevance to their role. Once direction is established, set and seize upon a few immediate performance-oriented tasks and goals. The sooner the team works towards and achieves performance results, the sooner they will become a real team.

Once you know where you are going, strong decisions can be made about how the team should be best structured to meet the purpose and goals. It is critical to provide opportunity for the team to actually work together on projects and tasks if you really want them to act as a team. Often groups of workers are given the title of ‘team’ because they report into the same manager, but that doesn’t really make them a team, they’re a working group. Working groups reward individual accountability; real teams encourage individual and collective accountability. Working groups discuss, decide and delegate, whereas real teams discuss, decide and deliver real work together.

Effective organisation of the team will include clarifying roles and responsibilities and agreeing the levels of decision-making authority. It is difficult for someone to feel truly empowered if they are uncertain and fearful about where the boundaries are. Regularly check that you are doing your best to employ each member’s unique capabilities. Look out for people’s natural strengths and weave them into the team’s activities. Be honest about your own strengths and limitations and pull together a team with complementary skills and abilities. However brilliant you are, the last thing you want is a team of people exactly like you because your clones will have all the same strengths and all the same weaknesses. Diverse and complementary personalities and skill-sets will bring greater innovation, different perspectives and high quality, client-focused outcomes. 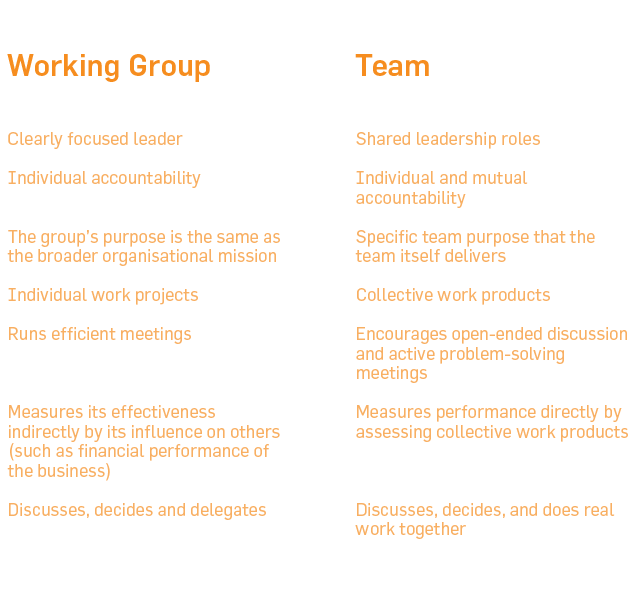 Key message: real teams need to be organised around collective work products, and are strengthened by the right mix of skills and capabilities to deliver effective performance.

There are some team processes that are specific to the function of the team, and involve the team members directly using these processes to streamline and enhance them to make certain they are supporting the team purpose. There are other processes that apply to any team such as team meetings, communication channels and conflict resolution.

Be careful not to be consumed by meetings. In a recent conversation I had with a board member of a City firm, she estimated that 80 per cent of their typical working day was spent in meetings and only 30 per cent of that time was considered to be productive. The admission was followed by a coaching conversation which revealed she was uncertain about her team’s core purpose and direction. How could she really decide where to best spend her time without knowing the ‘why’ of her team? One way of keeping meetings fresh and focused is by involving team members in the preparation and facilitation of the meeting. The team as a whole can be responsible to see that their meeting is beneficial and dynamic.

Conflict within a team is inevitable, and also welcome if constructive. High-performing teams establish processes for surfacing and resolving differences in order to seek out collaborative solutions. Once again this level of trust is fostered by a common goal and clarity of structure; it is easy for colleagues to recognise positive intention because they have a mutual accountability for the success of the team. 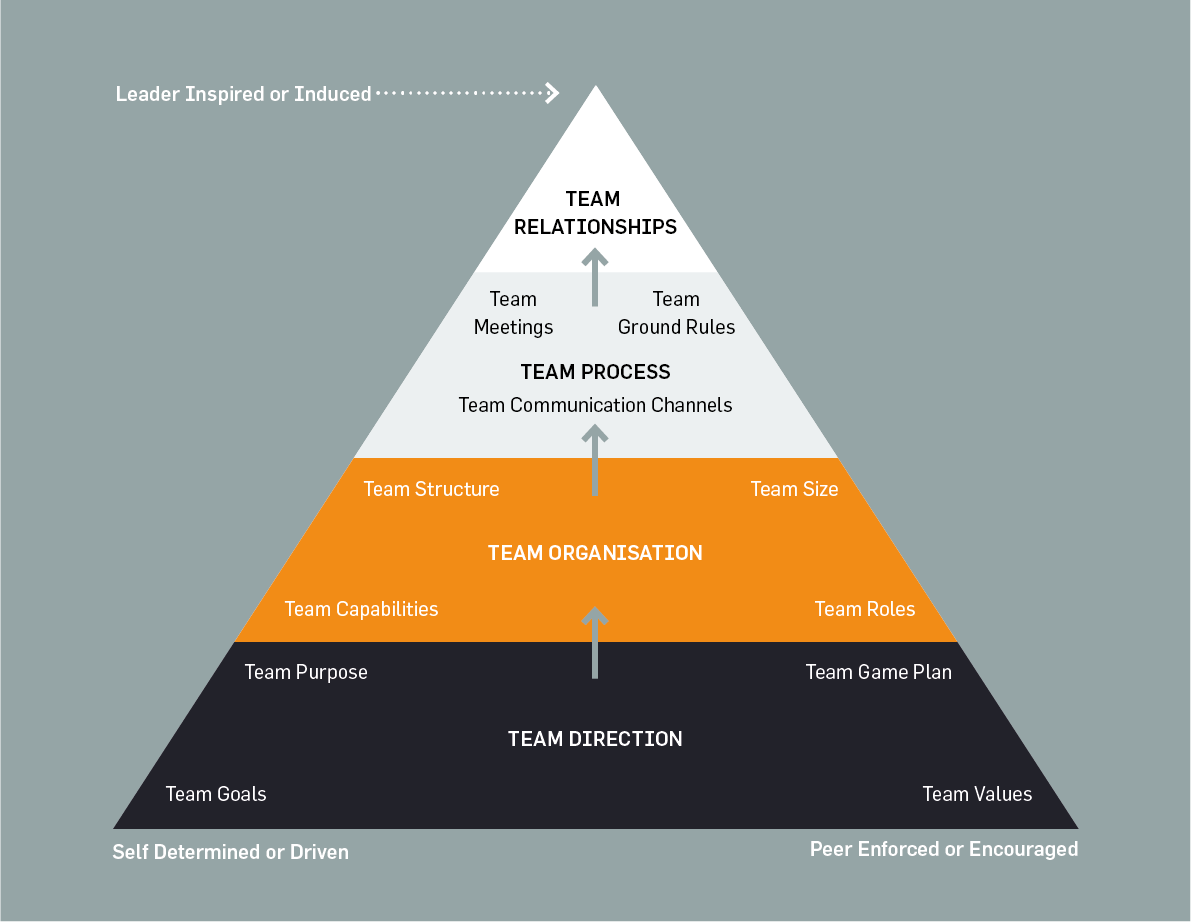 Many newly appointed managers start by putting their whole energy into the social aspects of the team. Although these activities provide much needed opportunities to bond, they could prove to be only a temporary boost if the direction, organisation and processes have not been established.

Many of the challenges and difficulties that teams face are initially diagnosed as relationship issues, but further examination will expose the root of the problem; a lack of understanding regarding purpose and structure. When team members are frustrated with their colleagues or disillusioned with their role it can often be linked to foundational weaknesses in team direction and organisation.

Team atmosphere is crucial, and needs a manager’s attention and maintenance. Two-way feedback should be the norm; with regular honest conversations between each of the members, as well as between the manager and their direct reports. Team members in high-performing teams are willing to share feelings and opinions as well as hard facts; this enhances communications and openness with their colleagues. As a manager, go out of your way to demonstrate a sincere and genuine interest in the people themselves, over and above the work that they produce. Be open about your interests, views, and hobbies so that rapport can be built on information that you have disclosed. Be interested and be interesting.

Key message: A strong performance culture is sustained by open and honest communication; where challenge and feedback conversations are commonplace.