This is the second part in a 12-part series featuring snippets from our new book, Team By Team. The only team building book ever written by the actual team. You can buy the ebook here.

Articles in this series:

The art of failing towards the win

Failure may be seen as not doing something we initially set out to do. However, mastering the art of failing forwards can help break the fall. Sir James Dyson, the inventor behind the famous bagless vacuum cleaner, who as of 2014 owns more land in England than the Queen, is well known for demanding innovation from his people. But this involves demanding failure too. He claims failing is an essential part of winning and that the 5,126 failed vacuum cleaner ideas that he trialled didn’t provide a step backwards, but actually, an indirect step forwards. Thomas Edison, another famous inventor, shared this mindset. Failure is a key part of progress; Many wins are built on the foundations of progressive failings. Embracing a long series of failures without letting the frustration of them overwhelm us – that’s what separates the Dysons from the Defeated. High-performing teams will not only embrace failure, they’ll actually get a kick out of it. A high-performing individual or team will observe failures, then learn from those experiences. They will use constructive feedback as a springboard to ensure they land even further ahead than they would have otherwise. This form of agility in commercial operations allows us to fail forwards. 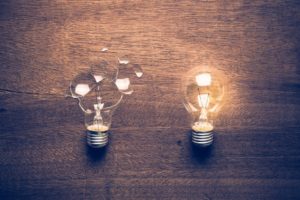 Creativity is often required to deliver solutions for failing processes or a lack of clarity around what to do next. Any of these failed processes provide key insights into “what went well” and “how do we make it better”. A good review leads to a forwards failure. Creative ideas need failures to function, or the creativity dies. Why would we need creative solutions if all our problems were already solved? If we’re not failing, we’re probably not growing.

“Why would we need creative solutions if all our problems were already solved? If we’re not failing, we’re probably not growing.”

What will prevent us from failing forwards?

Or, put another away, what stops us from failing towards a win? A criticism culture. Cynical views about failure within a high-performing team will almost guarantee a fall backwards rather than forwards. Criticism or punishment won’t encourage boundary pushing or bravery, it’ll breed hesitation. However, growth insight and constructive feedback will lead to quicker solutions and a growing team. Changing the narrative of failure is the first small step towards the win. If we can see failure as failing towards the win, the definition of failure changes entirely.

Samuel Smiles, a Scottish author, said: “We learn wisdom from failure much more than from success. We often discover what will do, by finding out what will not do; and probably he who never made a mistake never made a
discovery.”