What is the first word that comes to mind, when you hear ‘Contagious Excellence’?

Why are there so many cons associated with the word “contagious”?! Why can’t we take the “con” out of “contagious” and add a little more “pro”? Why can’t it be “Protagious”?

At IW, we like to challenge social conventions and flip the world around sometimes. And so, for our final SpeakEasy of the year, we gathered a room full of business shapers, HR leaders and L&D professionals to help us explore this “new” world where the contagion was seen as something positive. Something like “Excellence”. We wanted to see if excellence could “catch on” and spread from person to person, directly or indirectly, with minimal effort from the originator, in the same way a contagious disease can.

Through a series of interactive exercises involving a deck of cards and some Jenga blocks, we played around with a number of ideas and theories, drawn from the fields of sociology, science and psychology. 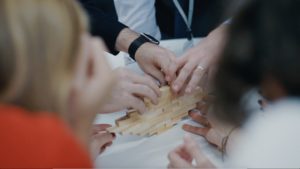 So what did I learn from these ‘Contagious Principles’ over the course of a two-hour SpeakEasy?

I learnt that with a clear standard, high levels of engagement and a supportive tribe you can achieve excellence without the hard work.

Now that’s an idea worth spreading!