“Life Would Be Simple Without the Visible People”

“Our culture needs a radical overhaul.”

“I would love to do that, but culturally it wouldn’t fly.”

I don’t know if you’ve ever heard things like that, but I have, quite regularly, in fact, over the past few years, from both clients and programme participants.

Actually, I like to think of culture as the invisible person in the room … and I’m always fascinated to think about what they would say. Would they honestly feel that they were as dominant as those sentiments make them out to be?

I imagine they might actually say something very similar, but opposite: “I’m doing my best to have influence around here, but the people just don’t allow it.”

Cultures are sometimes explicit: “This is the way we expect things to happen around here. See, it’s written up there on that massive banner.”

Sometimes they are implicit: “I wouldn’t say it that way next time,” in hushed tones.

It could also be said that a workplace culture is formed primarily from the sum of a few key influences:

(A myriad of other smaller factors, of course, also feed in case by case!)

So, can we actually go about “creating” a culture? Well, yes, I think we can if we choose to. 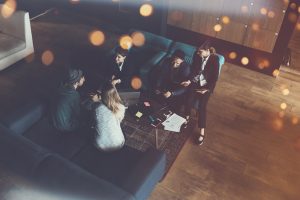 What I’ve observed over the last few years is that telling people what culture you want, or trying to create it through words and catchphrases isn’t the way to get results. It’s about creating the environment in which people can most naturally embody the culture you would like to see, then allowing space and time for them to get used to it.

To get everyone in the room in harmony with everyone else, they all have to sound, feel and think in a similar way. But rather than telling them how to do it, first try thinking about what would create the environment to encourage it – and then allow them all to assimilate to that behaviour.

Both the visible, and the invisible people.